Unit testing is a level of software testing where individual units/components of the software are tested. The purpose is to validate that each unit of the software performs as designed. 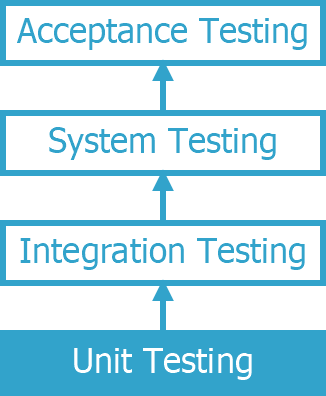 A unit is the smallest testable part of the software. It usually has one or a few inputs and usually a single output. In procedural programming, a unit may be an individual program, function, procedure, etc. In object-oriented programming, the smallest unit is a method, which may belong to a base/ super class, abstract class or derived/ child class. (Some treat a module of an application as a unit. This is to be discouraged as there will probably be many individual units within that module.)
Unit testing frameworks, drivers, stubs, and mock/ fake objects are used to assist in unit testing.

When is it performed?

Unit testing is the first level of testing and is performed prior to Integration Testing.

Unit Testing is normally performed by software developers themselves or their peers. In rare cases, it may also be performed by independent software testers.

Let’s say you have a program comprising of two units and the only test you perform is system testing. [You skip unit and integration testing.] During testing, you find a bug. Now, how will you determine the cause of the problem?