In my career so far, I have seen the testers to be the most enthusiastic community in the software industry.

The reason being, that tester always has something in their scope to learn. Be it domain, processor technology, a tester can have a holistic development if they wish to.

But as they say “There is always a dark side”. Testers also avoid one type of testing which they feel is very complicated and developer’s piece of cake. Yes, you have guessed it right. It’s the “WHITE BOX TESTING”

If we go by definition, “White box testing” (also known as clear, glass box or structural testing) is a testing technique which evaluates the code and internal structure of the program. It’s the counterpart of Black box testing.

White box testing technique is used by both developers as well as testers. It helps them understand which line of code is actually executed and which is not. This may indicate that there is either missing logic or a typo, which eventually can lead to some negative consequences.

Step #1 –
Understand the functionality of the application through its source code. Having said that, it simply means that the tester must be well versed with the programming language and other tools and techniques used to develop the software.

Step #2–
Create the tests and execute them.

When we discuss testing, “coverage” is the most important
factor. Here I will explain how to have maximum coverage in the
context of White box testing.

There are different types and different methods for each white
box testing type. See below image.

Let’s understand these techniques one by one with a simple example.

In the programming language, a statement is nothing but the line of code or instruction for the computer to understand and act accordingly. A statement becomes an executable statement when it gets compiled and converted into the object code and performs the action when the program is in running mode.

Hence “Statement Coverage”, as the name suggests, is the method of validating that each and every line of code is executed at least once.

“Branch” in a programming language is like the “IF statements”. If a statement has two branches: true and false.

So in Branch coverage (also called Decision coverage), we validate that each branch is executed at least once.
In case of an “IF statement”, there will be two test conditions:

Hence, in theory, Branch Coverage is a testing method which when executed ensures that each branch from each decision point is executed.

For Statement Coverage – we would need only one test case to check all the lines of code.

Because Statement coverage will only cover the true side, for the pseudo code, only one test case would NOT be sufficient to test it. As a tester, we have to consider the negative cases as well. Hence for maximum coverage, we need to consider “Branch Coverage”, which will evaluate the “FALSE” conditions. In the real world, you may add appropriate statements when the condition fails.

So now the pseudo code becomes:

With this, we can see that each and every line of code is executed at least once.

Here are the conclusions so far:

Now let’s move on to the Path Coverage:

As said earlier, Path coverage is used to test the complex code snippets, which basically involves loop statements or combination of loops and decision statements.

Now to ensure maximum coverage, we would require 4 test cases.
How?

To simplify these let’s consider below flowchart of the pseudo code we have: 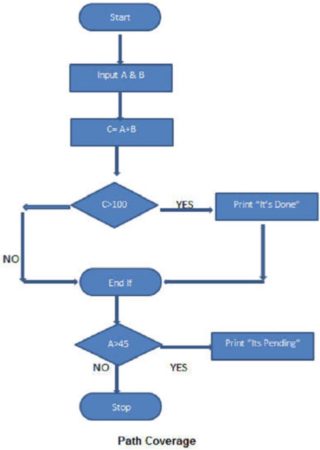 So, In order to have the full coverage, we would need the following test cases:

So the path covered will be: 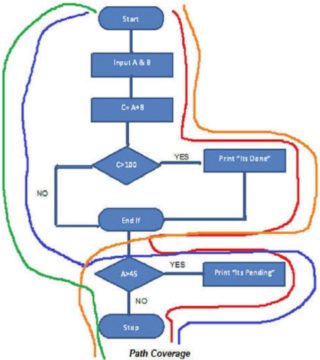 Note that the statement, branch or path coverage does not identify any bug or defect that needs to be fixed. It only identifies those lines of code which are either never executed or remains untouched. Based on this further testing can be focused on.

Relying only on black box testing is not sufficient for maximum test coverage. We need to have a combination of both black box and white box testing techniques to cover maximum defects.

If done properly, White box testing will certainly contribute to the software quality. It’s also good for testers to participate in this testing as it can provide the most “unbiased” opinion about the code.